I logged in again today to continue the quests I had started and got a nice surprise. It looked like 20 to 30 people running past me to some destination. I thought I’d follow and see what was happening. I then noticed a button at the top of the interface. By clicking it I was not part of the public raid.

I checked the map and saw various swirls of colour dotted around. And a few seconds later text appeared in the centre of the screen telling me that rifts were open and monsters were coming through. And it was right, soon there were monsters in front of everyone and dieing pretty quickly.

A few rounds of monsters later and that particular rift was closed. A nice feature of the game was that there is a little icon symbol thing where you are awarded loot. You click it and get to see what you’ve been awarded. There were various things, but mainly quest related items. I thought this was a nice touch to the game in that you don’t have to worry about loot distribution in a raid, it’s pretty much all taken care of automatically.

As the rift raid continued to run around I noticed the quest log update to say everyone needed to kill a particular named boss. I ran up the hill to find a massive demon monster stood there and everyone had already engaged in battle. I of course joined in and soon it was detroyed and the rifts were closed. 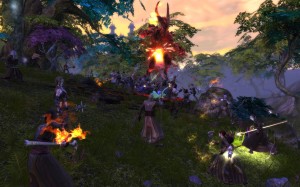 It looked like I logged in just at the right time to see some of the exciting action that Rift offers. It adds in the raid element to the game without having to always get a guild and organise a raid through dungeons to get to the boss and then spend 10 minutes deciding on loot, you just join the raid and do your part and end up feeling like you are part of something.