I have been playing Rift, the official release, for 2 months now and still enjoy it. I’ve posted in the Shadowpuma Forums and previous blog on how much I liked the game, and it still holds true.

I’ve not managed to be online at the right time or long enough to actually get together with other guild members and do raids or big dungeon quests, but seeing guild members log on and off and give the occasional ‘hi’ means a lot.

I’ve managed to get Shadowpuma up to level 40 so far, and there is still a lot of adventuring to do and areas to discover. Along the way I’ve been collecting screenshots. Here are a few of the screenshots I think show off the game graphics and different zone environments.

The latest in online MMORPG was made available to me this week. Rift (www.riftgame.com) brings everything you want from an MMO together in to one place.
I’ll start by explaining what I experienced with it before I go comparing it.
I setup my account with Trion and applied for Beta. Eventually an email arrived giving me a key to enable play of RIFT. This last phase of the Beta (phase #5) appeared to be a stress test of numbers online since a lot of people were talking about it and being given access. I downloaded the client, a few gigs worth of files, installed and was ready to go. The time came for everyone to log in and enjoy the experience of creating characters and adventuring.
I created my usual type, a mage. The character creation is very good. You get the usual tools to adapt your looks, and the typical slot to enter your desired name (or pick an automated one). Once it was all complete your character appears in the main screen for selection.
Upon logging in you get to do a series of quests that gets you started on the talent trees for the various callings, along with getting used to the keys, movement and interface. Since I’ve played many MMOs prior to this it was really easy to pick up.

The things I like about this game include …
The Graphics – They are very detailed and give the game a very fantasy feel to it. With my current gaming PC setup I was able to run it at full spec and still get around 20fps. The animations throughout are fantastic, ranging from the battle animations, spell casting, and environment animations, they all add to the effect of you really being in the world of Telara.
The Sound – This has been thought about a lot from the time spent in game. There is the background music that adds atmosphere to the areas you explore. There are the usual battle cries and weapon sounds as you fight you way through the evil. But best of all there are the little things that add to the game. The sounds when you level up, the quest acceptance and completion sounds, and the other nice pings and ding tunes you get all seem to fit right in place.
The Interface – Everything appears in the right place. I didn’t find myself hunting or looking for something that wasn’t there. The tool tips are all very handy and appear in the right place also. The colours and feel have really been polished off to make the game look wonderful at the users level as well as within the 3D world.
Overall – I like Rift, a lot. But at the end of the day it is just another MMO that has the same fundamentals as all the others before it. They just happened to be done at a very high standard. 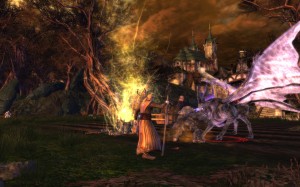 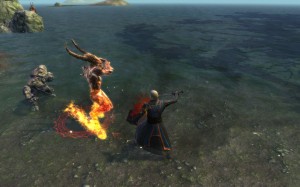 If you have played the Beta’s of Rift at any point you will probably notice the number of comments that appear in the channels. The same topic keeps coming up over and over again … how much Rift is like WoW (World of Warcraft)! And I have to say, yes it is … and it’s much like all the other MMORPGs out there. It looks like it’s taken the best of everything and merged it in to one. You have the game play style and interface of WoW, there is the character look and feel of EQ2 and Vanguard, the dimensional theme from of Aion, but as I mentioned, they are all done to a higher standard. For example wings … I’ve seen characters with wings before, but Rift just has them look better and animate better. 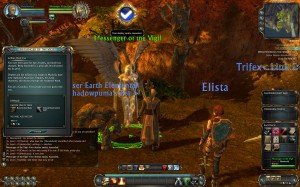 They have breath meters in this game too!

Will I be buying and subscribing to play this game? Probably not. Mainly due to the real life commitments. But it has certainly been a great pleasure in playing the Beta before the game gets launched in March 2011.